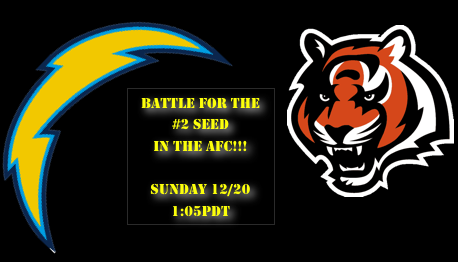 What’s up Chargers fans?!  I hope you’re having a glorious day.  I’m super pumped for this battle between the 10-3 Chargers and the 9-4 Bengals, but I am a little confused as to why this game was not flexed to Sunday night.  We are literally talking about two of the best teams in the NFL going head to head in a game with serious playoff implications.  This game could potentially decide which of these two teams will have home field advantage and a bye in the playoffs.  As far as regular season games go, they don’t get much more important than this.  In case you’re wondering how the NFL determines “flexibility”, I found their guidelines on the NFL website and for the life of me cannot figure out why they are airing a 5-8 Carolina Panthers team vs. an 11-2 Vikings team that will probably bench most of their starters by half time if the game is in hand.  To make matters worse, the Panthers’ starting QB is an undrafted 2nd year player who is starting in place of Jake Delhomme because he has a broken finger.  REALLY NFL?  REALLY?  You’re making us watch that piece of crap instead of honoring your own guidelines(below)?

The NFL obviously does not like San Diego because we are a “small media market”.  Suck it NFL!  SD is one of the best this year and you’re going to have to deal with us in prime-time eventually.  I guess its up to the Chargers to win the whole fuckin’ thing so we can give the NFL and the networks a big fucking shit-burger to eat.

So enjoy the sunny afternoon match-up which is THE game of the week because the night game is a piece of shit!

ARE YOU JOKING???  Brett Favre is great and all, but C’MON MAN!

Allows teams to play their way onto the Sunday night schedule

Last season, the NFL implemented for the first time in its history a primetime “flexible scheduling” element on Sundays in Weeks 10-15 and in Week 17.

Flexible scheduling ensured quality matchups on Sunday night in those weeks and gave surprise teams a chance to play their way onto primetime.

Only Sunday afternoon games are eligible to be moved to Sunday night, in which case the tentatively scheduled Sunday night game will be moved to an afternoon start time. Flexible scheduling will not be applied to games airing on Thursday, Saturday or Monday nights.

Just as the six major college football conferences have done for many years, the NFL will have the flexibility to move the start times of games on Sundays, using a 12-day notice format.

For example, a game scheduled for a Sunday could move from a 1:00 p.m. ET kickoff to an 8:15 p.m. start, but the change would be made and announced no later than the prior Tuesday, 12 days prior.

The NFL has commonly moved games between 1:00 p.m. ET and 4:15 p.m. ET on Sunday afternoons, and the NFL now employs flexible scheduling to include one of its primetime packages of games – on Sunday evenings.

In Week 17, in order to ensure a Sunday night game with playoff implications, the decision to move the start time may be made on six days notice.

11 thoughts on “Go Flex Yourself NFL!”