So if you’re new to America or the NFL, here’s a quick recap.  The NFL developed a vastly popular sport that is arguably the most popular sport outside of the other “football” around the world.  Around the turn of the century, wealthy people who loved sports began selling their football teams to “Robber Barons” as the sports landscape become more of a business / political landscape.

Wealthy people are wealthy for a reason.  They generally like to spend other people’s money rather than their own.  Someone in the NFL discovered they could get public tax dollars to pay for their new stadiums rather than spend their own money to build them. The NFL then went on 21st Century Campaign to trash fans and disparage municipalities who dared to say that this money was actually for Firefighters, Police Officers, Teachers, Roads, and other municipal services.  Gawd forbid a billionaire actually pay for their own shit. 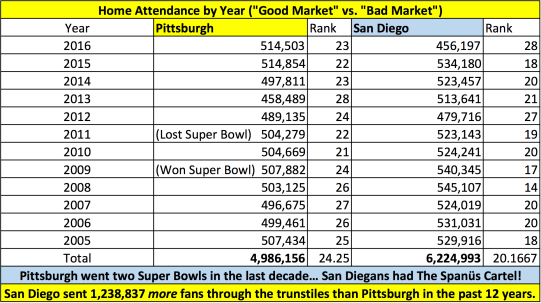 The Chargers were in San Diego for 56 Years.  Before the NFL fucked up and moved one of their most established franchises to fucking Carson… San Diego had put 1.6 MILLION MORE FANS THROUGH THE TURNSTILES THAN PITTSBURGH.  Keep in mind that “Steeltown” went to TWO SUPER BOWLS and won one over that same ten year time period…  San Diego had the Spanos family and Norv Turner.

We all knew The Chargers in Los Angeles would never work.  Not sure why the NFL, Arash Markazi, or any Twitter Trolls thought gaslighting the country would actually work, but it hasn’t and won’t… ever.  LA didn’t want the Chargers then and they still don’t!  Now they are talking about moving to London.  It’s a fucking laughable story… mainly because everyone outside of the owners table knew this would unfold exactly as it has.  But the recent Bolts to London story is a priceless pie to Spanos’ face!