Am I stuck in Ground Hog Day!? What The Fuck Dean? In all seriousness, how long do we have to watch this crap linger with our football team… By The Way Dean, you are lucky “We” are still referring to the Chargers as “our” team as opposed to “your” team.

If you do not get rid of AJ and Norv at the next possible juncture Dean, you run the risk of San Diegans not caring about “your” team any time soon.  I think every San Diegan with a decent football IQ saw this coming 6 years ago.  I would be willing to bet my life that the only person in San Diego who was stupid enough to think that Norv could take us to the Promise Land, was AJ Smith.

AJ Smith is also the guy who watched Brees and Rivers practice side by side for years and made the determination that Rivers was somehow head and shoulders above Brees… it is obvious who has the head and the shoulders to win a Super Bowl… Not AJ or Rivers… Yes, it was/is Brees.  Not to mention the blown personnel moves in Michael Turner, Sproles, VJax, Wes Welker, Clay Matthews, Larry English, Jacob Hester, and on and on and on.

AJ DON’T LET THE DOOR HIT YOU IN THE ASS ON YOUR WAY OUT WITH NORV!

NOTE TO DEAN SPANOS: Fire AJ and start interviewing General Managers so they can start their fucking Head Coach search!  WHAT THE FUCK!? 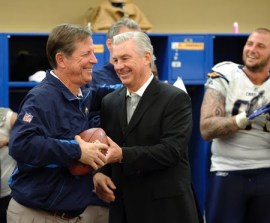 It is truly amazing and baffling at the same time.  Glimpses of greatness and potential only to be marred by folly and disaster.  I don’t know if San Diego teams are cursed or not, but I do know this Chargers team under AJ Smith created its fair share of bad luck.

The first step may have been firing a 14-2 head coach.  It did not help the team to pass on players like Troy Polamalu, Clay Matthews, Michael Oher, and on and on we could go.  Smith could have traded Brees and got something of value in return with Rivers waiting in the wings, but he chose not to.  Darren Sproles is now on his way to the playoffs because Smith did not feel he was worth keeping… and under Norv Turner, maybe he wasn’t.  Sean Payton has found plenty of ways to use him.  Did I mention he caught Drew Brees’ pass to set the all time single season passing record on Monday Night football this week?  Just a little more sand in San Diegans’ eyes.  Thanks AJ!  This combined with other terrible moves like trading away top round draft picks for players that make little to no impact in games… like Jacob Hester(Sorry Jake).  AJ Smith does this year in and year out and the team is depleted in depth and skill as a result.  Christ, how did we let Wes Welker go?  How do we have two 1st round cornerbacks and one 2nd round cornerback drafted and only one interception at that position? That’s not good and you can almost guarantee the D-Coordinator will be fired also.

Some people in town have been arguing that we need to keep AJ Smith because he resurrected the franchise.  I think Marty Schottenheimer was more responsible for that along with the people Butler had in place.  AJ Smith got lucky with the Eli Manning snafu, but ultimately San Diego was the unlucky one because we lost Brees and essentially got the most un-clutch kicker of all time, a pre-madonna-steroid dosing linebacker who distracted everyone from football, and Luis “IR” Castillo essentially.  Well, them and Rivers.  I’d still rather have Brees and none of those players!  We would probably have a championship by now.  But noooooo, AJ Smith had to play Trader Jack.

Norv Turner!  Are you fucking serious AJ?  Norv Turner!?  You need to be fired 5 years ago for making this hire.  Every San Diegan knew it would end like this.  Nothing to show and a team worse off.  Why?  Because we could use the internet and see what he did for the Raiders and Redskins.  I realize we were bad and AJ gets a lot of credit for building the team back.  We went to the playoffs like 6 times when the division was horrible.  Let’s not got holier than thou and pretend AJ built a dynasty here.  He built an excruciatingly painful product to watch during those playoff runs that never even amounted to a Super Bowl appearance.  Fuck winning, how about just getting there.  Norv couldn’t even do that with arguably “the most talented team in the NFL”, according to experts year in and year out.  That reeks of change needed!  AJ brought in Norv and should have been tested for drugs when he did that.  They both need to go and here is why.

I have heard form local writers that we should keep AJ because the Chargers are the best they have been ever.  Well, wake up and stop living in the past because we are not good anymore and the talent on this team spells out below average; hence the 8-8 record we’ll end up with this year.  The Falcons have surpassed the Chargers along with the Saints, the Cowboys, the Seahawks, the 49ers, and probably a few more next year unless we get someone who knows how to coach AND win(regular season and playoffs).

If we’re lucky, Rivers might have another 10 years.  The Spanos’s need to move with a sense of urgency.