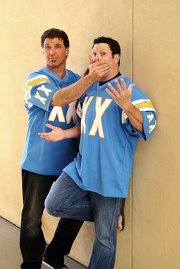 The dipshit management team at XX1090 is back at it again doing a bang up job!  New Ownership, same dipshit middle management.  Apparently Scott said something that offended a few people.  Funny people offend others sometimes.  No one is going to please everyone for fuck’s sake.  Now Scott is on a little unpaid vacation until this dips hit manager gets transferred, fired, and/or given cement shoes off of Point Loma.  IS that offensive?  Sorry, I thought it was funny.  If you don’t like it, visit another shitty website.

This is utterly ridiculous and its bad enough we had to put up with those crappy Mexican government commercials.  In a perfect world, Scott & BR will get picked up by a station that doesn’t have to play those terrible ads and Tex Meyer will be managing an Alaskan radio station by next week!

One of the most offensive things about this whole process was that XX1090 chose to issue this press statement and lie to its loyal listeners by telling us Scott Kaplan departed like it was his decision.  We all know Scott & BR, and they would not leave without saying goodbye.  Maybe, just maybe a real explanation would’ve toned down the anger San Diegans have for Tex and his management team regarding this decision, but lying just made it worse.   As far as management decisions go, they don’t get much worse.

PREDICTION:  Tex Meyer gets transferred quietly in the next few weeks.

Kaplan’s latest remarks were made in a conversation with a caller shortly after 6 a.m. Jan. 25. They lasted for more than six minutes.

Kaplan said, “I think that she is currently a woman. I cannot confirm for you that she has been a woman her entire life. My guess is that at some point she had some form of surgery. Have you seen this chick?”

He later said, “I’ll take Holly Rowe’s giant butt any day on ESPN, compared to this sasquatch that they use.”