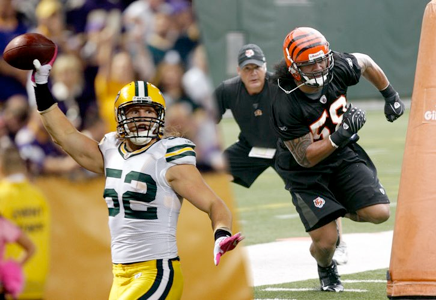 The Chargers need help on defense?  While we had no chance of getting Brian Cushing, the Chargers could have drafted either of these guys and possibly both had we not traded our 2nd round pick the year before for Jacob Hester.  I can honestly say that Jacob Hester will NEVER measure up to either of these linebackers’ careers when all is said and done.

One rule of thumb you can base your college drafts on is; NEVER pass on a USC linebacker!  From Junior Seau to DeMarcus Ware to these guys.  You better seriously rethink your college evaluation skills when you draft a Larry English over these guys, especially when Rey was the best linebacker in all of college football last year.  It is just insane what AJ Smith has done the past several years in the draft and you have to wonder how much input Marty Schottenheimer had on his ‘04 and ‘05 drafts now that his past 4 of 6 drafts have been questionable at best.

Clay Matthews and fellow USC linebacker, Brian Cushing were co-defensive players of the week this past week.  It was a breakout performance for Matthews, who came to the Packers with a big-time background.  He worked his way up from walk-on to starter at Southern California, the same school where his father and uncle, Bruce, played before going on to the NFL. Matthews’ grandfather also played in the NFL.

Rey Maualuga was considered and nominated for the September NFL Defensive Rookie of the Month.  Maualuga has started all three games this season, ranks fourth on the team with 15 tackles, has also recorded a sack and forced two fumbles. Not a bad start for a guy that 31 other teams passed up on, some twice.

The sample size is small, but its not surprising to anyone who watched these linebackers on college football’s best defense ever last year.  Additionally, USC is the NFL’s 33rd team and the Chargers should keep a better eye on their players… especially since AG Spanos went there!  Yo AG, get vocal in the draft room and don’t let the Charger pass on Taylor Mays if we can get him!  PLEASE!

SIDE NOTE:  Can anyone tell me why we spent an ’08 3rd round pick and an ’09 2nd round pick on Jacob Hester?  THAT IS TWO PICKS ON A GUY WHO CONTRIBUTES TO 1 OR TWO PLAYS PER GAME… IF HE IS LUCKY!  Stop drafting LSU players > JaMarcus Russell, Buster Davis, Jacob Hester