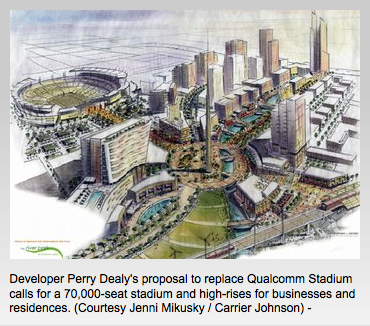 “This is a big concept, a big vision, and it’s a bit overwhelming to people because they’re not used to seeing it,” Dealy said.

“What we’re trying to lay out here is a vision, not a solution,” Carrier said. “What we’re saying to you is, all these possibilities exist if we dream large enough for this site.”

a. The $566M from any land sales needs to go into the San Diego general fund to be used for the repair of neglected city infrastructure. Not to support a sports team.

b. The $302M future taxes won’t be extra income, it’ll be transferred income off-set by corresponding tax losses elsewhere in the city.

Frankly, I don’t want to see one more red cent of city funds being spent on corporate welfare for an organization that’s been a drain on the city funds from day one. With the exception of one or two events each year, every game played by a sports team is a net drain on the city’s treasury.
Read Entire Article