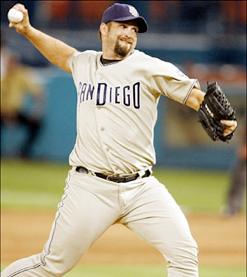 First off, let us get some things straight.  Last night’s game was not pretty by any stretch of the imagination.  Scott Hairston ran us out of the inning after driving in the go ahead run with one out, Edwin Moreno barely managed to get us through his major league debut by throwing 17 balls and 9 strikes in the 7th, and Kouzmanoff had another poor performance with runners in scoring position.  BUT, WE WON!

Last night’s game was a typical Padres win.  Look horrible at the plate for most of the game, run the bases worse, walk batters in crucial situations, and then somehow get runs on the board to hold on to the win like your pit bull holds on to an intruders leg.

Heath Bell came in and got three K’s to slam the door on the $98,912,000 payroll that came in to Petco last night and got the L.  I will admit that the LA Dodgers will probably get a few more wins than the Padres this season, but I would also like to point out that the division winner will probably only need to be ten games over .500.  If we can eliminate mistakes like we made in last night’s game and play sound baseball over 9 innings, the Padres have a very very long shot at wining the division.  Don’t get your hopes up though!

Hold that thought until we see this Walter Silva kid pitch tonight!