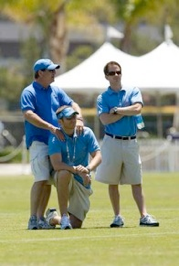 Click here to read the article in it’s entirety, but this is the good part!

Charger fans have helped the Bolts sell out their last 30 regular season and postseason games.  What’s the current status on tickets for the 2008 season?

“I think a lot of people don’t realize that there are tickets available just from annual attrition. Our fans have given us a distinct home-field advantage the last several years. We’re 15-1 at home the last two years. Our season ticket holders have played a big part in that.”

What’s the latest news regarding the Chargers’ efforts to build a stadium in San DiegoCounty?

“We’ve been at this now for more than six years, and we’ve devoted a tremendous amount of time and money to the effort.   Right now, as you know, we’re concentrating all of our efforts on the last possible San Diego County sites. There are two sites that we’re potentially looking to build on. The one that seems to be the one that everybody is most interested in is the bay front site, where the power plant now sits. We’re really looking hard at that right now. We have studies underway. One is about the feasibility of that site and the other deals with how we could finance the project going forward. We’re hoping within the next two to three months these studies will be done and we can come to some resolve by the middle to the end of the summer as to whether it’s a viable location and we can proceed.

With the news about Ed Roski planning to build a football stadium in Los Angeles, does that affect the Chargers’ stadium plans in San DiegoCounty?

“Ed Roski is a friend of mine. Our fathers were in the development business together, and we’ve talked about various development projects over the years.   Ed has told me about his plans for a Los Angeles stadium. And I’ve told Ed that the Chargers’ focus continues to be in San Diego. We’ve tried very hard to work something out here. We weren’t successful in getting anything done in the City of San Diego. We then turned our attention to San Diego County. We’ve looked in National City and in Oceanside. We’re working with Chula Vista now, and we’re going to continue to look at our last two options in Chula Vista for as long as we can.”

Finally, Mother’s Day is just around the corner.  Do you have something special planned?

“We’ll probably have a nice quiet dinner at home with my wife Susie and my sons. I’ll do a little barbecuing at the house. That’s what I enjoy the most.”