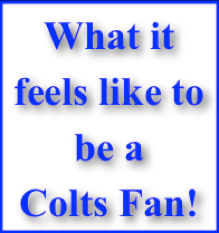 It seems as though San Diego has been on the losing end more often than not throughout my life in San Diego.  Thankfully, not this time!  This is to enjoy and relish.

– Really, I am so tired of this. Hot and cold offense, defense that self destructs at the worst possible moment. I would rather support an 8-8 to 10-6 team that can put together a little passion and a game plan in the playoffs than one that seems to perennially be one and done. PM’s regular season record has been spectacular over the past 7 seasons, but he’s a dismal 6-8 in the playoffs. I don’t blame Manning, it IS a team effort, but this team for some peculiar reason is often absolutely lethargic and downright dismal in the post-season. Billy Freaking Volek is right.

-That three and out when a first down would have won the game happened several times during the seasonal winning streak but the defense of the Colts prevailed. The Colt running game really hurt the offense this year. Runners tackled in the backfield or at or near theline of scrimmage was commonplace. Very disappointing end. The Colts are eliminated again by the same team. They are like the Wizards always getting eliminated by the Cavs.

-Uh….the play action pass doesn’t work if you can’t run the ball effectively.When will you people learn this? A running play would have been folly as well. If we had run it and were stuffed, most of you would have blamed Manning for not checking out of a run. LOL

The perfect play was drawn up but not executed. Clark was slow off the snap causing Addai to run above the block putting Clark in the passing lane which in turn caused Peyton to pump allowing an unabated rusher to blindside him. It was so bad that Peyton never saw him. Which is very rare. When was the last time you saw Manning get hit blindsided?

For all you clown blaming this on Manning get a life and learn some football.

-There was mass confusion on that last play, no one knew the snap count and no one blocked…why not TAKE A TIME OUT before the biggest play of the game and get everyone on the same page??? That was ridiculous, and thats why we lost. SD only scored when we punted…excuse me, POORLY punted…out of our own endzone, and the OT touchdown drive was a gift from the refs.

Not sayin we would’ve won if the Tim jennings phantom holding call on a throw-away pass wasn’t called, but we would’ve at least had a CHANCE! We werent given a chance in OT, starting with Darrell Reid calling HEADS. Hey Darrell, TAILS NEVER FAILS BUDDY!!!! DAMN IT!!!!!!!

Additionally… Enjoy this from last year!